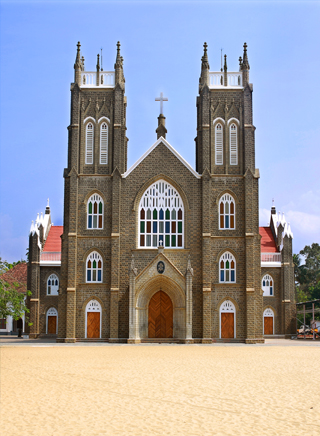 St. Andrew's Basilica, Arthunkal is one of the famous pilgrim centres in South India. Though the Church is named after St. Andrew the Apostle, it is the feast of St. Sebastian that has brought fame to Arthunkal. The Christian presence in Arthunkal dates back to a very early period, to 7th Century or earlier. After the arrival of the Portuguese in Kerala Jesuit missionaries turned their attention to Arthunkal. They under¬took missionary work in Arthunkal from 1530 onwards. As there was a ban on Christian conversion till 1560 permission to put up churches was hard to obtain. When Fr. Gasper Pious s was appointed the first Vicar of Arthunkal he managed to get permission to construct a Church.

In 1581 the King of Cochin, Veera Kerala Varma, gave permission to build a Church in wood. It was the second Vicar, Fr. Giacomo Fenicio S.J. who managed to obtain permission from the King to renovate the wooden church in stone in 1602. He had spent 33 years in Arthunkal in two terms and is rightfully called the Apostle of Arthunkal.

Arthunkal rose to fame when in 1647 the miraculous statue of St. Sebastian was brought to Arthunkal from Italy in a ship. St. Sebastian was the captain of the body guards of the Roman Emperor Diocletian. He was brutally killed and became a martyr in 286 AD on account of his faith in Christ.

People from all beliefs who were afflicted by epidemics prayed to St. Sebastian and were cured. And the feast of St. Sebastian in January began to attract thousands of people from every walk of life. Gradually Arthunkal became a pilgrim centre for people of all creeds. In 18th century the basilica was taken charge by Carmelite missionaries from Jesuit missionaries. During the Carmelite period on 29th November 1829 St. Chavara Kuriakose Elias was ordained by Rt. Rev. Dr. Mauralius Stablini, the Archbishop of Verapoly who was residing at Arthunkal Basilica. The Church built in stone in 1602 was renovated again in 1870 with a new facade and a bell tower. The new Church in granite (nibbles), the foundation of which was laid shortly after 1900, was blessed and opened for service in 1967. It took 60 years to complete the new Church. There is an ancient tradition followed to this day by the devotees of the Hindu deity, Lord Ayyappa, that they pay homage to St. Sebastian as they return from Sabarimala, the abode of Lord Ayyappa.

Every year from January 10 to 27 the feast of St. Sebastian takes place attracting lakhs of people. The procession with the statue of St.Sebastian on 20th January is the main attraction of the feast. During the procession eagles hover over the statue of St. Sebastian recalling how the wounded St. Sebastian was taken care by eagles. An ocean of people moves with the statue of St.Sebastian during the precession. Considering the antiquity and the fame of the Church, the Holy See after due process, has granted Basilica status to St. Andrew's Church, Arthunkal on 21St May 2010. The historic honour bestowed upon this church was solemnly declared on 11 the October 2010 during a Pontifical Mass presided over by His Grace Most Rev. Dr. Salvatore Pennacchio, the Apostolic Nuncio to India.

A great drawback of Arthunkal Basilica was the unsuitable sanctuary which was totally unfitting to its external majestic look. As per the records found in the archives of the Parish an extraordinarily beautiful and elegant altar was planned by forefathers. But it could not be realized might be because of the financial strain. 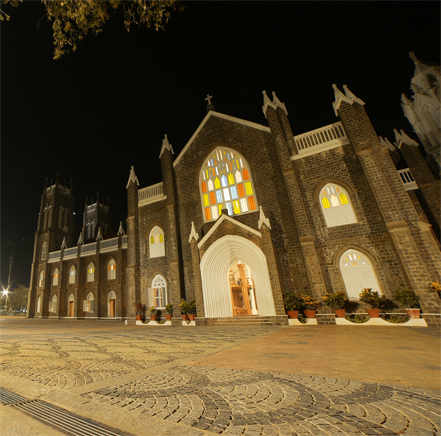 In 2016 immediately after the feast of St. Sebastian the church was closed for its renovation. H.E. Bp. Stephen Athipozhiyil, his coworkers in the Bishop’s house and the Basilica committee showed green flag to proposal of Fr. Christopher M. Arthasseril the Parish Priest and Rector of St. Andrew’s Basilica to construct the sanctuary and to do whatever is possible to avoid grave acoustic problems in the church. Hectic preparation and efforts were made to complete the reconstruction and beautification of the church within one year and definitely before the Makaram Thirunal 2017.

By God’s grace and mercy the works could be miraculously completed taking only eleven months and the church was blessed and opened on 8th January 2017. H.E Rt. Rev. Dr. Stephen Athipozhiyil blessed the new sanctuary while the congregation assembled in and outside the church chanting the heavenly hymns of gratitude to heavenly Father who feeds even the little sparrow. It was a memorable day. Dr. James Anaparambil was the homilist on that wonderful day and the homily was inspiring and biblical and the same is being remembered even today.

The new altar in the sanctuary which depicts the last supper is a big attraction of St.Andrew’s Basilica. It was constructed by Mr. Raphy from Mudamvely a talented carpenter who is well known in Ernakulam and Alleppey district. The altar made of teak wood is so glorious and majestic and one of the biggest altars found in Kerala Church.

The new sanctuary of Arthunkal Basilica is the biggest attraction of all the pilgrims from Kerala and outside Kerala. The most important thing is, it really gives every prayerful atmosphere in the church and people spend even hours inside the church. It was also the decision of the parish priest that the church should provide enough seating arrangements in the church and the pews made of the teak wood was constructed in view of that.

It was a great fortune to Arthunkal Basilica to have the Episcopal Ordination of H.E Bishop James Raphel Anaparambil at St. Andrew’s Basilica, Arthunkal on 11th February 2018.The historical event of ordaining a Bishop which is usually done at the Cathedral Church fortunately happened at St. Andrew’s Basilica, which situated in the middle part of diocese of Alleppey. It was the desire and decision solely of Bishop James Raphel Anaprambil who was entrusted the appointment order as the Co-adjutor Bishop of the diocese of Alleppey by the Nuncio Arch Bishop Giambattista Diquattro calling him at the nunciature office in Delhi on 30th November, the feast day of St. Andrew, the apostle. The Episcopal Ordination ceremony itself was a noticeable event by the presence of forty Bishops from 3 Rites. The Church, church compound and its vicinities were fully packed by the faithful. All the functions including the reception and felicitatory meeting were well arranged and were notable by the presence of huge congregation.

The Rosary Park in the compound is also a big attraction to the devotees and pilgrims. All the twenty mysteries – major Christ events described in the Gospel are depicted beautifully and wonderfully. Each and every statue in the Rosary Park reminds us of the medieval sculptural work in Europe. The works were done by Mr. Amal Francis, the same artist who constructed the sanctuary of St. Andrew’s Basilica. The Rosary Park was blessed by Bishop Stephen Athipozhiyil in the presence of Bishop James Raphel Anaparambil and Bishop Douglas Regattieri, Diocese of Cesena, Italy just before the flag hoisting for the feast of St. Sebastian on Thursday 10th January 2019.

May St. Sebastian, the courageous witness of the- gospel of life and love in Christ, be the special protector of all who seek his intercession! 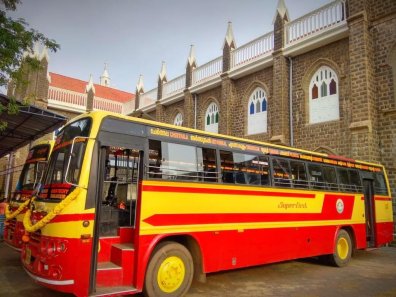